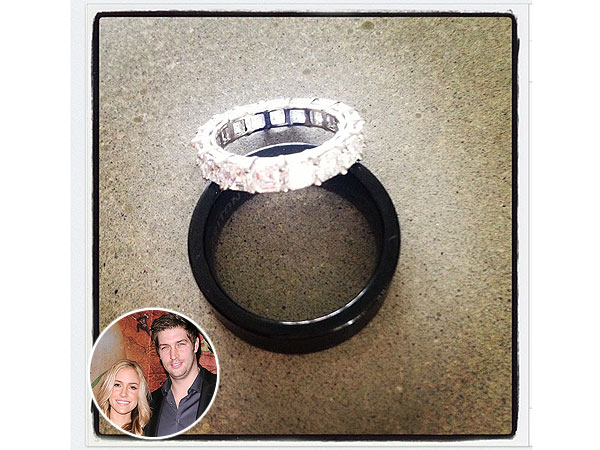 Touchdown! Kristin Cavallari and her papa Bear, Jay Cutler, have tied the knot.

“Im officially Kristin Elizabeth Cutler!!!!!” she Tweeted Friday with a photo of their rings.

The announcement that the former Laguna Beach reality starlet, 26, wed the pro quarterback, 30, came just hours after they got a marriage license in Nashville.

The pair’s nuptials follow their Nov. 2011 engagement â€“ a second for the pair, who called off their first in July 2011.

“I think we both knew from the moment we met that we wanted to marry each other,” she told PEOPLE shortly after Cutler’s first proposal. “It’s been a great situation.”

Once reunited after their split, the happy pair wasted no time starting a family. Cavallari and Cutler announced in January 2012 they were expecting their first child. The TV personality gave birth to son, Camden Jack in August of that year.

“It was the most incredible moment I’ve ever felt,” she said of childbirth. “With Camden, I’ve realized what really matters. We’re a family.”