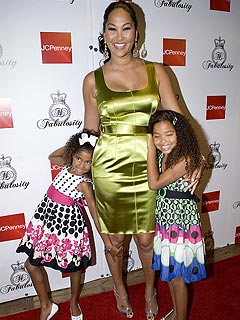 Kimora Lee Simmons has not disappointed her followers on Twitter.

After announcing the arrival of a son with longtime boyfriend Djimon Hounsou, the Baby Phat CEO on Wednesday followed up with the name of the infant: Kenzo Lee Hounsou.

Filling her 18,000 Twitter mates in on the details, Simmons revealed that baby boy weighed in at 8 lbs. and 20 inches long.