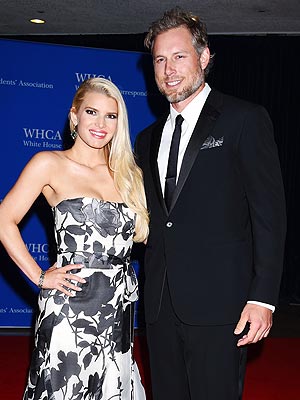 “We are overwhelmed with complete happiness and love having made our eternal commitment,” the newlyweds told PEOPLE in an exclusive statement on Saturday.

“To say ‘I do’ in front of family, friends and, most importantly, our children has been the happiest moment of our lives.”

The couple’s son, Ace, who just turned 1, served as a ring bearer and their daughter, Maxwell, 2, walked down the aisle as a flower girl accompanied by Ashlee’s 5-year-old son, Bronx.

Simpson started dating Johnson four years ago, when they were introduced by mutual friends, and the pair instantly fell for one another.

“I couldn’t ask for a better man in my life right now,” Simpson told PEOPLE in 2010. “I’m in a great place and if right now could last forever, I’d take it.”

Johnson took her up on that offer and proposed in November 2010 with a stunning ruby engagement ring by Neil Lane.

But wedding plans were put on hold â€“ twice.

First Simpson gave birth to their daughter Maxwell, and then she welcomed their son Ace Knute last June.

“I definitely look forward to the day that I can look into his eyes and make that commitment that we both really long for,” Simpson told PEOPLE last year. “He’s just got to stop knocking me up!”

After getting her post-baby body back thanks to Weight Watchers and diligent workout sessions with trainer Harley Pasternak, Simpson is ready to start this new chapter in her life with Johnson.

In May, she posted a photo of the two of them on Instagram with the caption: “I can’t wait to marry you!!!”