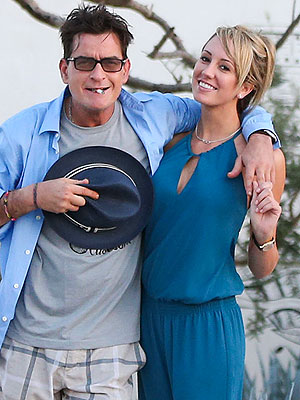 Sure, he’s been down this road before â€“ three times to be exact.

But Charlie Sheen could not be a happier man. The Anger Management star proposed to his girlfriend Brett Rossi on Saturday, his publicist Jeff Ballard confirms to PEOPLE.

This will be the fourth wedding for Sheen, whose brief first marriage, to Donna Peele, ended in an annulment, and who is divorced from Denise Richards and Brooke Mueller.

Sheen gave PEOPLE this exclusive statement in the quirky fashion his millions of Twitter followers have come to embrace, referring to Rossi by her nickname “Scottie.”

“With all due respect to Donna â€“
that maiden Klay-Vinn was annulled.
Therefore,
if “three”
truly is a charm;
The mashup/acronym
of the real CS,
(Charlie & Scottie)
HAS to be;
“Char-M-stee…”
xox
c&s”

No date has been set for the wedding to Rossi, who spoke of the engagement in more conventional terms.

“Yes! We are engaged! He even was a gentleman and got down on one knee,” she tells E!. “I was not expecting it at all. We had a beautiful Valentine’s Day and he proposed to me early this morning after we watched the sun rise.

“The ring is classic and beautiful, but I don’t have any photos to share just yet. This is the happiest moment of both our lives. He’s my best friend and my soulmate.”