Baby on the Way for Rachael Leigh Cook and Daniel Gillies 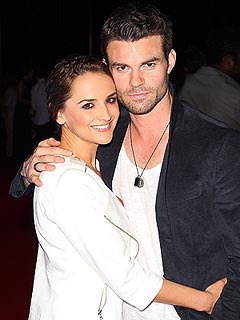 Rachael Leigh Cookâ€˜s perception of parenting is about to change â€” sheâ€™s pregnant!

The Perception star, 33, and husband Daniel Gillies are expecting their first child this fall, PEOPLE confirms.

â€œThanks for the love you guys,â€ the actress Tweets, whileÂ The Vampire Diaries actor adds, â€œThank you everyone. We are delighted.â€

Cook â€” best known for her role in Sheâ€™s All That â€” and Gillies, 37, will celebrate their ninth wedding anniversary in August, after tying the knot in 2004.

In addition to their television roles â€” including the dad-to-beâ€™s upcoming performance in The Originals, a spinoff of theÂ Vampire series â€“ the couple are also preparing for the May 15 premiere of Broken Kingdom, which Gillies both produced and stars in alongside Cook.