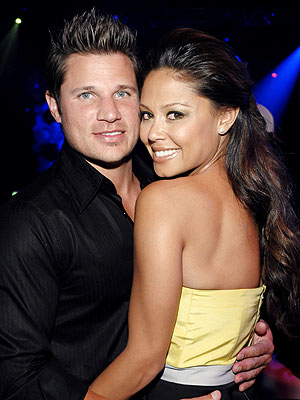 Talk about a day in paradise.

Vanessa Minnillo and Nick Lachey were married Friday evening in a tropical island ceremony in front of just 35 friends and family, their reps confirm exclusively to PEOPLE.

“For us, this is just a stepping stone to do what we ultimately want and thatâ€™s to start a family together,” Minnillo tells PEOPLE.

The pair, who became engaged in November, flew their wedding guests to the secret location as a surprise.

“Nobody knew where they were going,” says Minnillo, 30.

Adds Lachey, “Our wedding invitations were in the form of a plane ticket. We told them they were going away and the attire was â€˜island chic.â€™ It was all very vague.”

The look was completed with a tailored bow belt at her waist and chapel length tulle veil.

Lachey, 37, who hosts The Sing-Off, sported a Dolce & Gabanna suit.

Their wedding will be televised on a TLC’s special called Nick & Vanessa’s Dream Wedding premiering on July 30 from 9-11pm ET/PT. 2.Diane Kruger (Green Auction : A Bid to Save the Earth)