Dunzo! AnnaLynne McCord and Dominic Purcell have called it quits on their relationship after dating for three years, her rep confirms to Us Weekly.

“They have split,” her rep tells Us, adding that the now-exes, however, are “still amicable.”

The 90210 alum, who last stepped out with the actor at the premiere of I Choose this past June, was first linked to Purcell after being spotted getting cozy on set of the CW show back in July 2011.

According to JustJared, who was first to break the news, McCord, 27, already has a new crush — New England Patriots wide receiver Julian Edelman, 28.

The blonde, who attended the hunks game against the San Diego Chargers last weekend, wrote on Twitter along with a selfie of herself on the field: “Big thank u to @Edelman11 for making me lose my voice #SCREAMING his entire 56 yard run for a much needed #TOUCHDOWN.”

AnnaLynne McCord – International Day of the Girl 2014 in LA 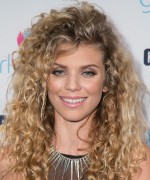