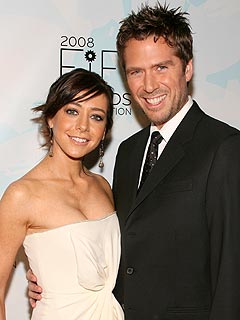 It’s a girl â€“ and she shares her birthday with her mom!

How I Met Your Mother star Alyson Hannigan and her husband, actor Alexis Denisof, who kept the gender of their baby a secret during pregnancy, have welcomed a daughter, her rep tells PEOPLE.

The girl is named Satyana Denisof and was born March 24 in Los Angeles, which also happens to be Hannigan’s birthday. “They’re very excited, and mom and baby are doing great,” says the rep.

Hannigan, 35, who first announced she was expecting to PEOPLE last October, craved ginger ale during her pregnancy and revealed she felt absent minded. “I have pregnancy brain, which I never realized was a thing but it is,” she said on The Ellen DeGeneres Show. “I sort of feel like a Koala bear where I’m slightly stoned all the time and say the wrong word.”

This is the first child for Hannigan and Denisof, 42, who met on the set of Buffy the Vampire Slayer during the 1999-2000 season and were married at the Two Bunch Palms resort near Palm Springs, Calif., in 2003.

Alyson Hannigan out waddling about in LA with dude